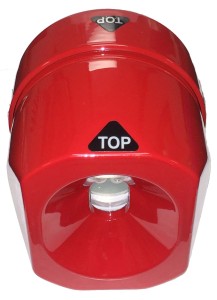 A fire is composed of heat and light, both visible and invisible.  And during the combustion process, smoke may be generated. A fire will emit specific radiation in the infrared and ultraviolet spectrum. A flame detector uses specialized sensors to detect these radiation to report and confirm a fire.

Safety Systems Technology’s Model F120 “Triple-Mode” UV/IR Optical Flame Detector uses the latest state-of-the-art microprocessor and circuity, eliminating the shortcomings of currently available UV/IR detectors which are subject false alarm interference. The F120 flame detector monitors for specific radiation emitted by a fire through the use of 3 sensors – one UV (ultraviolet) sensor and two IR (infrared) sensors. The UV sensor provides the shortest response time in detecting radiation from a fire. However, in some cases, dense pre-combustion smoke may blind the UV sensor. In other cases, false alarm sources such as arc welding and lightning emits UV radiation which can trigger a UV sensor. The Model F120 requires two of its three sensors to signal an alarm. Should the UV sensor be blinded by dense smoke, the two IR sensors will still detect the infrared radiation emitted by a fire. Likewise, the use of three sensors to confirm a fire allows the detector to reduce false alarms from other sources of radiation. Outputs are either voted automatically, or can be manually selected by the end-user. Selected outputs can either be for UV only, IR flicker only, IR flicker and Temperature, or any two out of three combination. The flame detector’s “Triple-Mode” operating principle or “voting” capability is what sets this detector apart from any other UV/IR detector. This detector will see a fire, while other manufacturer’s detectors may not. To insure reliable operation, the detector is equipped with an automatic Optical Self-Checking feature which continuously checks the optical viewing window for cleanliness and confirms operation of the detector circuits.

This mode utilizes three sensors to detect a fire, one solar-blind UV sensor and two IR sensors. The detector takes advantage of the use of these three sensors to confirm a fire and reduce false alarms and it will not be blinded by dense smoke which makes this detector superior to other brands in the market today. It is suitable for both indoor and outdoor use and offers increased false-alarm immunity over a UV detector.