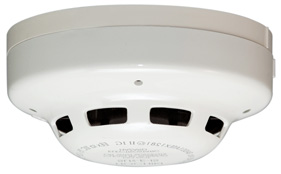 S270 Intrinsically Safe Photoelectric Smoke Detector is the only smoke detector useable in hazardous areas where flammable liquids or gases may be present. When installed with the companion intrinsic safe barrier, the S270 will not produce a spark that could cause an explosion.

Intrinsically safe detectors are used in hazardous locations where explosive levels of gas or vapors are normally or potentially present. The Model S270 circuit power levels are limited so the potential to ignite an explosive atmosphere is eliminated.

The Model S270 Smoke Detector is a photoelectric detector designed for use in hazardous areas. Each detector incorporates a unique high performance photo chamber technology, removing the need to use ionization detectors in a majority of applications. The high performance chamber has also enabled the detector threshold level to be increased, thereby improving the signal to noise ratio and reducing susceptibility to false alarms.

The smoke detector is installed into its accessory base with a simple twist-lock action. Operating power is provided over the 2-wire detection circuit from the Control System. Proper operation of the detector is indicated by two red Light Emitting Diodes (LED), which provides a local, 360º visual indication of detector status. For installations where the detector is not visible (such as above a false ceiling), a remote LED may be connected to the unit. When the detector senses a fire, it latches into alarm and remains in this condition until reset from the NOVA-5000 System control panel.