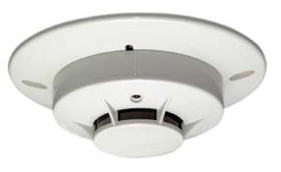 S260 Photoelectric Smoke Detector is recommended for locations where a smoldering fire that produces visible smoke is expected. Especially useful in commercial kitchens where cooking fumes can trigger ionization detectors.

The SST Model S260 Smoke Detector is a photoelectric type detector designed to respond to a broad spectrum of both flaming and smoldering fire conditions. The detector is designed for both open area protection (UL Standard 268) and for duct housing applications (UL Standard 268A). When installed with a suitable NOVA-5000 Detection System, the Model S260 may be used for Releasing Device Service. EMI/RFI noise immunity up to 20 volts/meter assures virtual elimination of false alarms from electrical interference. The detector includes an alarm verification feature which stores each alarm identification in digital memory, with alarm actuation only after the third identification. High signal-to-noise ratio permits a significant reduction in light baffling, thereby improving smoke entry characteristics while reducing nuisance alarms. The Model S260 is available with an optional 135°F thermistor heat detector. Operation of the heat detector is independent of the smoke detector circuitry, and returns to normal condition (selfrestoring) when the source of heat is removed.

The smoke detector is installed into its accessory base with a simple twist-lock action, which prevents unauthorized removal of the detector. Operating power is provided over the 2-wire detection circuit from the Control System. Proper operation of the detector is indicated by a blinking Light Emitting Diode (LED), which changes to a steady “on” condition when smoke is detected. For installations where the detector is not visible (such as above a false ceiling), a remote LED may be connected to the unit. In-place test features are provided in the Model S260 to ensure that the detector is operational. A test magnet, when properly placed near the detector, simulates the effect of smoke (approximately 1.3% per foot obscuration). This magnet test meets the requirements of the UL Sensitivity Test Feature. In addition, the actual sensitivity of the detector may be monitored with a standard voltmeter and a special sensitivity tester that allows direct readout in percent per foot obscuration without removing the detector from its base. For Smoke Detectors installed in inaccessible locations, a functional test can be made using a remotely mounted test switch.

In addition to operation of a remote alarm LED and test switch, the Model S260 may be installed with an optional supplementary relay. This relay can be used to perform local operations when an alarm is detected, such as shutting down a process vent fan, or air conditioning system.

The Model S260 Smoke Detector is intended for installation per NFPA Standard 72 on a ceiling, on a wall near the ceiling, or under a raised floor. NFPA 72 recommends Photoelectric Smoke Detection where smoldering fires that produce visible smoke are expected. (Where flaming fires that produce invisible products of combustion are also expected, SST Model S250 Ionization Smoke Detectors may be mixed with Photoelectric detectors to secure the earliest possible detection.) The S260 Smoke Detector is intended to be installed on maximum 30 foot centers, typically on smooth ceilings up to 15 feet high with minimum air circulation. This results in a 900 square foot coverage area which may be used as a guideline for coverage. Where special conditions exist (ceiling obstructions, high air exchange rates, etc.), reduced square footage spacing must be used to achieve adequate protection. Computer Rooms and other such installations may require spacing with maximum 200 square feet due to high air exchange rates. Complete application guidelines are in NFPA Standard 72.

The Model S260 may also be installed to monitor the air in a ventilation system using a special duct mounting base. The base extracts a small sample of the air from the duct and passes it through the detector for analysis.

Smoke detection capability shall be provided by photoelectric smoke detectors. The combination detector head and twist-lock base shall be UL Listed. The smoke detector shall have a status LED; flashing for normal operation, steady when the detector is actuated. It shall be possible to measure the sensitivity level of the detector in percent per foot obscuration without removal from the base, and to perform a functional test of the detector without requiring smoke. The test method must simulate effects of products of combustion in the optical chamber to ensure testing of all detector circuits. The specified detector shall provide facilities for energizing a remotely mounted LED status indicator, for connecting a remote functional test switch, and for energizing a supplementary control relay. To reduce the possibility of false alarms, the detector shall store 3 alarm verifications in digital memory, with alarm actuation on the third identification. EMI and RFI transient suppression techniques to withstand 20 volts/ meter shall be employed. Where specified, the Smoke Detector shall be supplied with a self restoring 135°F thermistor heat detector. Actuation of this device shall activate an alarm and function independent of the smoke detector electronic circuits. Safety Systems Technology Model S260 Ionization Smoke Detectors, or approved equivalent, shall be supplied.