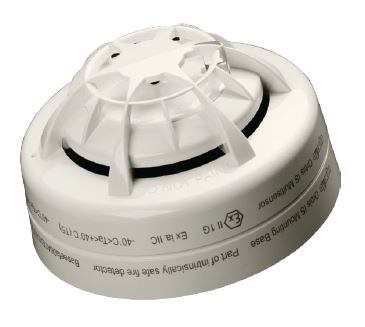 The intrinsically safe multisensor smoke detector is a thermally enhanced smoke detector and as such will not give an alarm from heat alone.  Its sensitivity is influenced by a heat sensing element which makes the smoke detector more responsive to fast-burning, flaming fires.

Photoelectric detection of light scattered by smoke particles over a wide range of angles.  The optical arrangement comprises an infra-red emitter with a prism and photo-diode at 90° to the light beam with a wide field of view.  The detector’s microprocessor uses algorithms to process the sensor readings.  The heat sensing element increases the sensitivity of the detector as the temperature rises.

How does the Orbis IS Multisensor Detector work?

The optical sensor is identical to the one in the Orbis IS optical detector.  Its sensitivity is, however, influenced by a heat sensing element which makes the detector more responsive to fast-burning, flaming fires.

It shoud be noted that the detector is a smoke detector.   Although the Orbis IS multisensor relies on both smoke and heat sensors it is not possible to switch from smoke detection to heat detection.

Specifications subject to change without notice.